In the spring of 2000, Joe W. Gilliam, Jr., his childhood friend, Howard Gentry, Jr., a local government official, along with a local businessman, David Dingler, brainstormed a football camp for inner city youth. Their overriding concern was that limited economic advantages available to youth in urban areas prevented them from attending and benefitting from area football camps run by professional coaches and athletes.

Joe Jr, also known as, Joey or Jefferson Street Joe to many, had a burning desire to give back to the youth in the community by utilizing his talent, wisdom, knowledge and resources from his collegiate (Tennessee State University) and professional experiences with the Pittsburgh Steelers, New Orleans Saints and other professional football teams.

Because of his unyielding passion to educate the inner city youth with the basic fundamentals of playing the game that he loved so much, Joe was able to form the first ever Joe Gilliam Football Camp.  His vision finally became a reality on the campus of Tennessee State University on June 5, 2000. During the five-day event, campers were given instructions in football fundamentals by former TSU greats and NFL veterans.  Holding the Camp in Nashville, TN on the campus in which his legendary journey began was rewarding to the man as a result of his tireless efforts and support of many others, the first ever Joe Gilliam Football Camp became a huge success.

Unfortunately, Joe Jr. never got to finish his vision and mission of educating the inner-city youth of the sport that he loved dearly because of his untimely death in December of 2000. Nevertheless, his father, Joe Gilliam Sr. took over and kept his son’s vision alive. With the guidance and steady direction of the elder Gilliam, the Camp grew every year in existence. His 45 years of experience as a football coach, mentor, and author of 4 books on the techniques of football was instrumental in the growth of the camp. The camp has grown to become the oldest youth summer football camp in the Middle Tennessee area. It has evolved into more than just a camp for the inner-city youth.  It has transformed into the Joe W. Gilliam Foundation(JWGF), a 501c(3) non-profit organization.  As a part of the JWGF efforts to educate, inspire, and give back to the youth in the community, the foundation is committed to the causes that reflects the values embodied in the organization.  The JWGF set an example for youth in the community and strive to establish the necessary tools and foundation to reinforce the values that lead to their success. Joe W. Gilliam, Sr. and Joe Gilliam, Jr had a vision and a passion to give back. They recognized that programs like their foundation were vital to serve the best interest of the community. Because of their vision, the foundation is able to provide the youth in the community and others an opportunity to learn how hard work, discipline, leadership, integrity, accountability, and diversity are key factors for their success.

Proceeds of The Joe W. Gilliam Foundation provide free books for former football players yet to graduate, their wives, and their children who attend Tennessee State University. 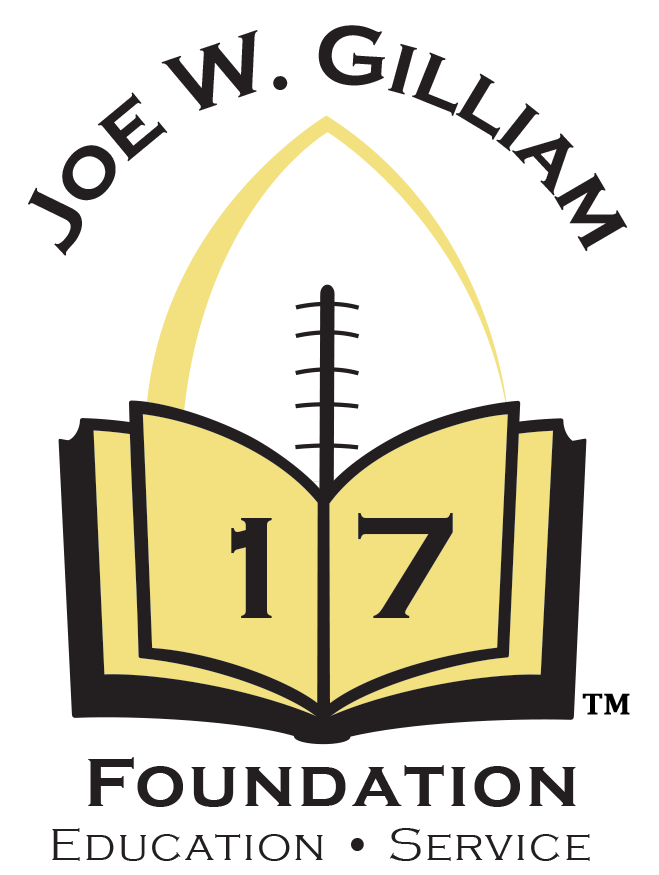